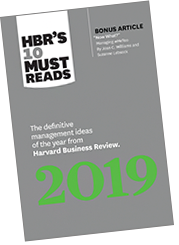 HBR’s 10 Must-Reads seem to be part of holidays; it is thoughtful and entertaining.  The book format encourages to read not only articles which catch attention but also ones that seem less interesting and could be skipped on the website.  Very often, those “less interesting” articles happen to be the most insightful.

This year a couple of unexpected articles were particularly eye-opening (from my perspective 🙂 ).

Artificial Intelligence for the Real World puts in perspective the excitement generated around AI.  AI might be debated and discussed, but the practical applications may not yet be defined, or practical enough, or rather limited (based on my observation).  From another side, futurists are expecting AI to make a business impact somewhat similar to electricity.  As at one point of human history many known products became “electric,” many know products and processes are expected to become “smart” in the near future.  The article shows a practical route to the future “smart” world.

Cognitive tecnologies are increasingly being used to solve business proglems, but many of the most ambitious AI projects encounter setbacks or fail.

Companies should take an incremental rather than a transformative approach and focus on augmenting rather than replacing human capabilities.

Interesting: based on the article, we are more likely to get an AI help in doing our jobs rather than to be replaced by AI, which is “smart enough” to do our jobs completely. 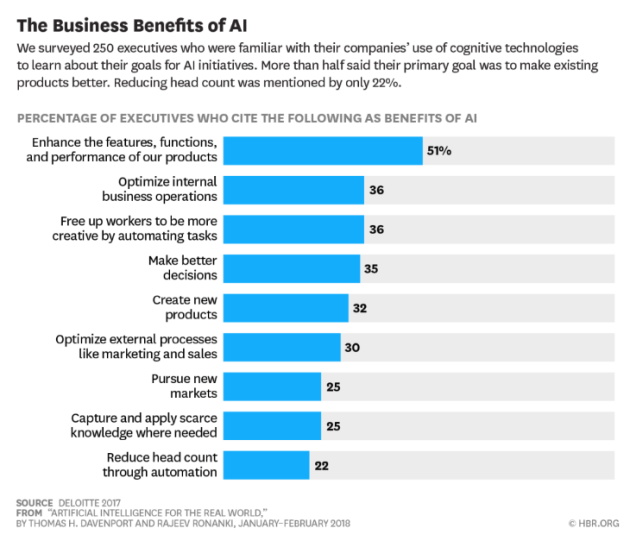 Why Do We Undervalue Competent Management?  explains the value of competent management for the organization and difficulties of copying this seemingly obvious approach.

Interesting: managers overestimate the quality of management in their companies.

Quality of management also varies across – and within – countries.  Below image represents US (blue) in comparison to worldwide (grey). 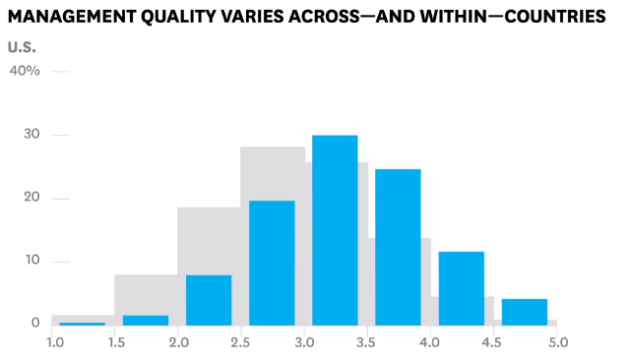 Wouldn’t it be nice to work for a company located on the right side of the chart?  🙂

Ah… we somewhat know our personas, but not enough (based on the consensus of the forum’s audience).

But…  we have so many personas and programs!  We need to prioritize personas by programs.

The unfortunate situation is that advanced organizations do not distribute all created content (activate = distribute).  Just adding a piece of content to the website is not “promotion.”

Top reasons why the content is not used: findability and relevance.

Some organizations found success with the “content amnesty week” when any content can be easily re-surfaced without any questions asked about its original purpose and justification.

CXO Buyers indicate that previous experience with the company is the most likely reason behind the selection of the vendor (the experience does not require a previous purchase; it might be a webinar attendance, etc.).

Interesting point from the audience:

Content strategy is the biggest pain for the organizations and usually absent.  When internal stakeholders demand: “We need more content!” the reasonable question is: “What are you trying to accomplish?”

SiriusDecisions provides Content Transformation Roadmap.  The recommendation is to try content transformation without…  telling anybody (if it is the easiest approach  🙂 ).  “Just do it!”

Why marketing?  Shouldn’t “driverless car” live in a technology universe?  If “driverless car” is left in the technology domain, it may never roll into the human world in its most helpful (and profitable) form. Marketers should shift the focus from the tech to the customer, and define business models of the future.

Do we need to buy a “driverless car?”  Maybe not…  Maybe the “car” is not necessary, and the concept of “mobility” eliminates (or includes) the concept of a “car?”

If we have a driverless vehicle for a limited use, what would be the ideal customer, who can instantly appreciate its benefit?  Driverless cars were tested in retirement communities.  “Mobility” opened new opportunities for residents to visit places, which were not accessible before.  The demand always existed, and now the technology offered a very valuable service.

The most interesting concept, from my perspective, is the question Sudha asked about the “Driverless World:” OK, the mobility can be available, but which business would want to pay for it?  Maybe, a shopping center?  These experiments are already underway…

The session took the audience on a wonderful trip into the future; the future of business.