Pleasure to read (or listen to) a business book in a fable format!  The book explains how managers can make lives of the employees better and improve the bottom line of the company at the same time.  The book describes recommendations for manager in different situations and industries how to improve employee job satisfaction.   Companion web site provides wonderful additional tools to use.

Three Signs of a Miserable Job: 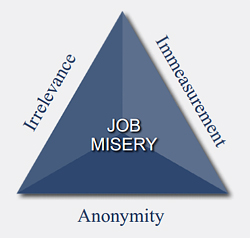 People cannot be fulfilled in their work if they are not known.  all human beings need to be understood and appreciated for their unique qualities by someone in a position of authority.  People who see themselves as invisible, generic or anonymous cannot love their jobs, no matter what they are doing.

Everyone needs to know that their job matters, to someone.  Anyone.  Without seeing a connection between the work and the satisfaction of another person or group of people, an employee simply will not find lasting fulfillment.  Even the most cynical employees need to know that their work matters to someone, even if it is just the boss. 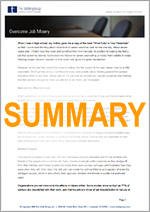 Employees need to be able to gauge their progress and level of contribution for themselves.  They cannot be fulfilled in their work if their success depends on the opinions of whims of another person, no matter how benevolent that person may be.  Without tangible means of assessing success or failure, motivation eventually deteriorates as people see themselves as unable to control their own fate.

As usually, interesting event that showed something new and unexpected.

HealthPartners adapted Lean UX as a response to the development shift to agile, and the approach helped the organization to move from documentation focus to result focus in UX design.  The process became more collaborative at the same time.

Interesting, one of the UX teams in HealthPartners consists of 4 UX designers, 7 front-end developers, 1 visual designer, and a supervisor.  This team works with others, including back-end developers, content specialists, marketing, and project managers.

A great article on Lean UX in Smashing Magazine has a good explanation of the process.

One of the most eye-opening parts of the presentation was the evolution of the style guide HealthPartners used.  The “old” version is very familiar to many organizations that use it. 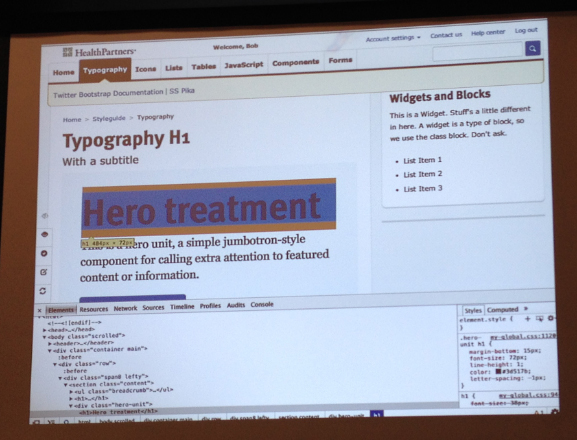 Very insightful – and reassuring that we, humans, are… human 😉  The book’s content is consistent with a wonderful Coursera class – Beginner’s Guide to Irrational Behavior.

One of the new and curious (and quite entertaining) notes is approach to ordering food in a restaurant.  It looks like that the enjoyment of the meal increases if all people in a party order their food without announcing it to the others at the table.  In many cases, people who order food want to feel “unique” and do not want to order exactly the same what other people at their table ordered.  As a result, they order something other than their first choice of meal or a drink, and do not feel as satisfied with it.  Interesting – people who order their food first at the table are as satisfied with the food as people who give their orders to the waiter in writing, without disclosing them to the rest of their friends.

If a person does not have a chance to order first, the option could be to “announce” what the person will order to the party to make sure that the choice of food is his and the person does not need to feel “lack of uniqueness” later while enjoying the food he likes.  Though it was completely new to me that anybody would need to establish their uniqueness at the party going out to eat, this phenomenon is an interesting nuance of human behavior 🙂